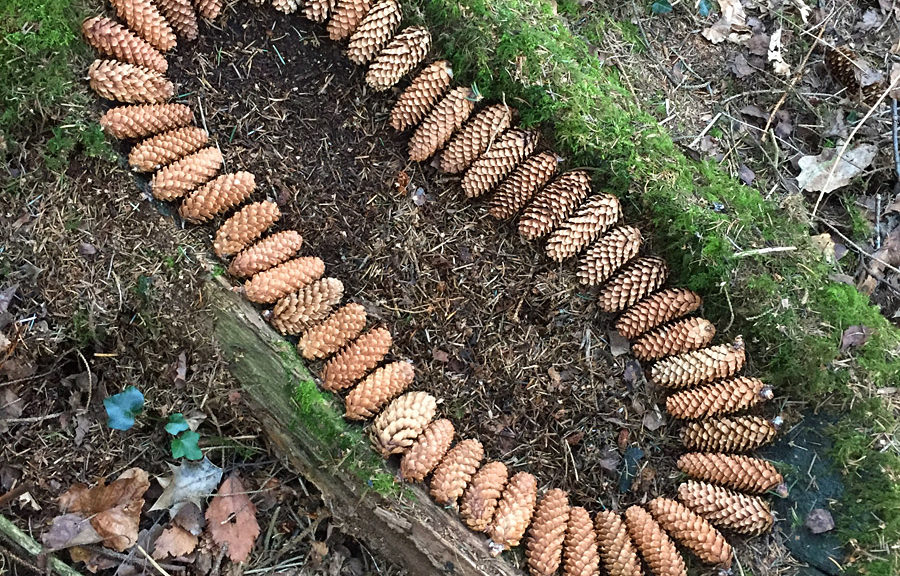 26th Feb. The hottest February day on record at over 20 degrees. I enjoyed the warmth despite grave concerns about climate change. I found an old hollow tree stump and lots of dead wood. The dead wood became like new shoots growing from the bones of the old. I placed them next to a moss covered stump…..the remains of a tree that was barely recognisable. Adding more they become like a row of standing stones, a row of fragments.

As I worked the tree remains became became a circle, an echo of the tree that was, the 2 circles becoming like the infinity sign, the continuous cycle of decay and renewal. Half still rooted in the earth, the other half became like a sacred space to enter and feel at peace.

I didn’t notice the single holly leaf in the circle until I photographed the circle. The piece itself, with the meditative quality of making in the woods is separate to that different way of looking to take a photograph. Photography can add to the piece and is essential but it is a separate activity.

A holly tree had been cut down nearby, and I could use the leaves to create another circle. Cutting leaves off and letting them fall into the circle became a meditative process. The materials I found close by determined the direction of the work. The green added a new dimension and I like the ambiguity that is starting to develop.

Beautiful piece of wood…..found a charred branch from the ashes of a small fire, I’ve seen other charred remains around the woods and they may be a good material to work with.

I saw a moss covered log looking almost like a discarded water trough, I cleared away the fallen leaves…….noticed pine cones all around and used them to echo the forms of eroding tree trunks, there is beauty in the cycle of decay and renewal. Like the holly added green I added green to this one with pine needles, echoing the return of spring.

I placed willow rings to see how that would work. Just at the moment it seems better to use the materials from the woods, although I will be making and adding willow work for the sculpture trail. 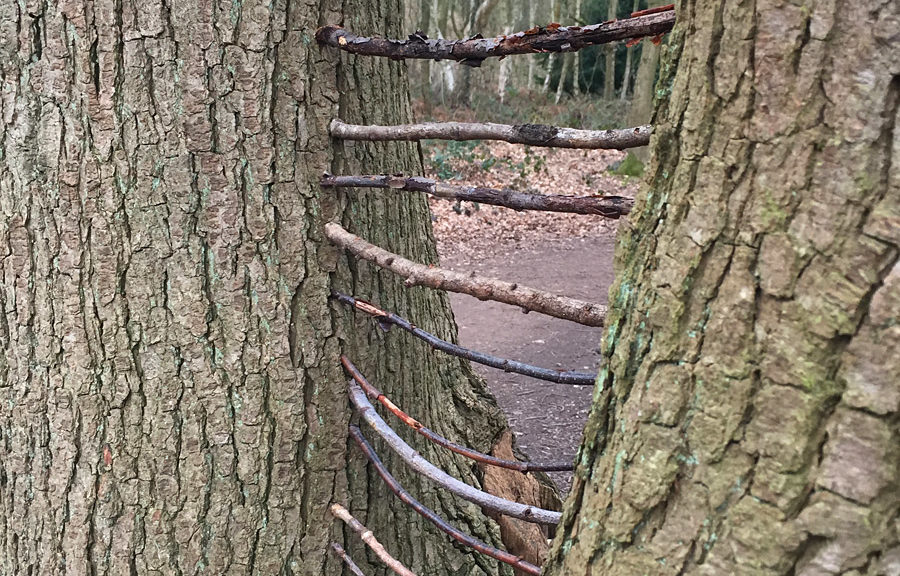 20th February. I have been walking round the woods for many months thinking about what work I would like to put in the Sculpture trail in April. This focussed time making ephemeral work in the woods has been very valuable. I would like these pieces to feed into my ideas, so my work for the trail will be inspired by the Outwoods as well as being informed by my previous work.

I have made work from leaves before, and it was good to work in that way again. I had thought about creating a spiral, but circles seemed right for the space, like the rings of a tree, ripples of time expanding out….. 2 kids appeared and carefully trod over the leaves and walked round each circle, it was good to see this interaction. Hopefully I can make more to appear and disappear during the trail when there are more people around.

Managed a few experiments with twigs, walking, looking and thinking, seeing more and more and working with what I saw and found. It was good to use what was already there. I hope I can make work that will draw attention to different spaces and encourage people to see the woods in a new way.

After being in the woods I spent some time working in clay. I have had ideas of making lots of small pieces that people could carry round the woods, like pebbles, but as I made them they became more like small ‘Cracked Earth’s, symbolic of the damage being done to the Earth. I thought it would be good if people could contemplate as they held a small sphere and walked round the wood. Someone pointed out that they might get thrown as much as carried around, so I’ll put that on hold for now! I might just take them to the woods to photograph, and contemplate their meaning.